Is your iPhone's battery affecting it's performance and what to do about it?

29th of December 2017: Apple has addressed the issue in depth in an open letter. This article has been updated to reflect the drop in price of battery replacement of affected devices.

It's been all over the news lately: Apple admitted to intentionally throttling old iPhones. Specialised blogs wrote about it first a few days ago, and mainstream news outlets are now picking it up, especially since a lawsuit is already under way.

So, what exactly is happening here? And more importantly, how can you find out if you're affected, and what can you do about it if you are? 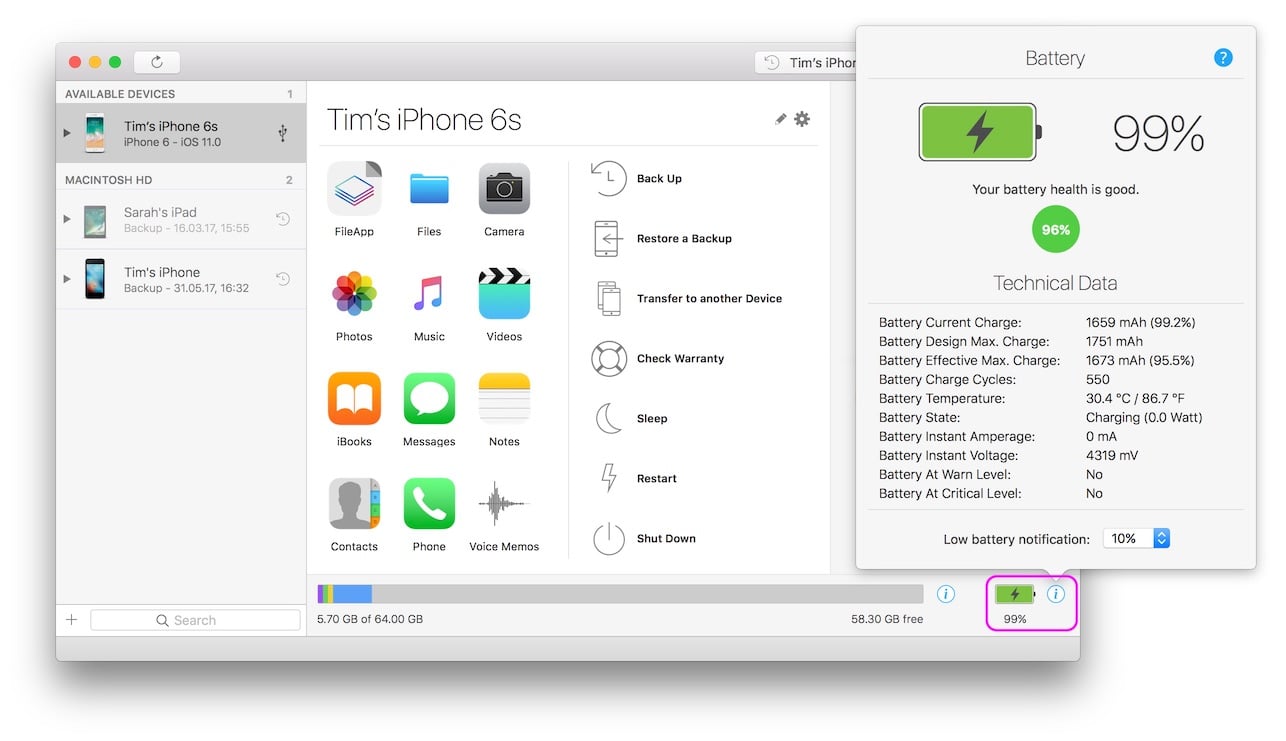 It's all about power management

The lithium-ion batteries which power our iPhones degrade with age and charge cycles. The most obvious effect is that your battery will seemingly drain faster, and you'll need to charge more often as time goes by.

The second effect is that the battery will gradually be less capable of delivering it's design max voltage, especially if it is not fully charged. Whilst the effects are related, this incapacity to deliver the required voltage in certain circumstances is at the root of the current controversy.

During 2016, more and more users began complaining about unexpected shutdowns of their iPhone, even though the battery charge was nowhere near zero. Apple released a fix in iOS 10.2.1, but did not explain the root of the issue or the nature of the fix.

Most of these unexpected shutdowns were caused by the battery being unable to meet minimum voltage requirements and consequently shutting down to prevent damage to electronic components. Apple's fix we now know consisted in throttling performance to lower the load on the battery. The fix is dynamic: performance is only throttled if required, so you may well start using your fully charged iPhone in the morning without noticing degraded performance, but find it sluggish in the afternoon during your walk in the park.

Factors which negatively affect your iPhone's battery's peak voltage are:

The worst case scenario is an old battery at a low charge level in cold weather.

How to determine if your iPhone is being throttled?

Performance will become sluggish: animations may stutter, and apps will launch more slowly. The effect can be quite pronounced, your iPhone essentially running at half it's original speed.

Trouble is, the effect is not permanent - it will depend on the factors listed above. So how to determine with absolute certitude that the sluggishness you are experiencing is real, and is caused by a degraded battery?

There are benchmarking iOS apps such as Geekbench which can precisely measure performance and give you objective data. Geekbench's founder recently posted a very thorough analysis of the issue which is well worth a read for the more tech-minded.

The trouble is that you'll need to 'catch' your iPhone at the right time to notice the lower score. Try benchmarking at 30% battery charge and in cold conditions, and compare that to a full charge benchmark ran from the warmth and comfort of your home, if the scores are substantially different, you're affected.

Since the performance throttling is caused by a degraded battery, using a battery diagnostics tool is a great way to determine whether you're affected or not. No need to go to the Apple Store - if you have a desktop Mac or PC, you can use iMazing's free version to diagnose your battery, it contains a pretty detailed battery info tool.

Apple's support document on battery servicing states that batteries of devices still under warranty will be replaced free of charge if they cannot retain at least 80% of their original capacity at 500 complete charge cycles. Because of this, we believe that the threshold at which throttling behaviours start to kick in is probably very close to these values.

In iMazing's battery tool, look at the health percentage indicator: anything below 80% warrants a battery replacement. It's a no brainer if your device is still under warranty. If it isn't, we'd say it's a no brainer as well: your iPhone will have better resale value, and you won't have to worry about your battery degrading even further. Apple charges roughly $80 for a new battery, but if you're feeling adventurous, you can do the job yourself for much less than that - YouTube is full of How To's on the subject.

In an open letter published on the 28th of December 2017, Apple has clarified it's policies and reduced the price of replacement of affected batteries from $79 to $29. So even if your iPhone is not under warranty anymore, having its battery replaced by Apple now is the best and safest option. In the document, Apple also promises that an iOS update in early 2018 will feature some kind of battery health reporting to help users determine if their device is throttled.

Bottom line, is Apple doing this to push us towards upgrading our phones?

We don't believe so. The initial intent is clear: prevent iPhones with degraded batteries from shutting down unexpectedly. These shutdowns can cause data loss (rarely), and require the device to be plugged into a power source to be booted again - not exactly ideal. Apple did the obvious thing and throttled older iPhones to prevent them from shutting down randomly and causing potentially major inconveniences.

Should Apple have communicated better on the subject? Sure. Is it another case of evil corporate planned obsolescence? Doubtful - John Gruber's take on the subject is, in our opinion, less dramatic and closer to the truth.