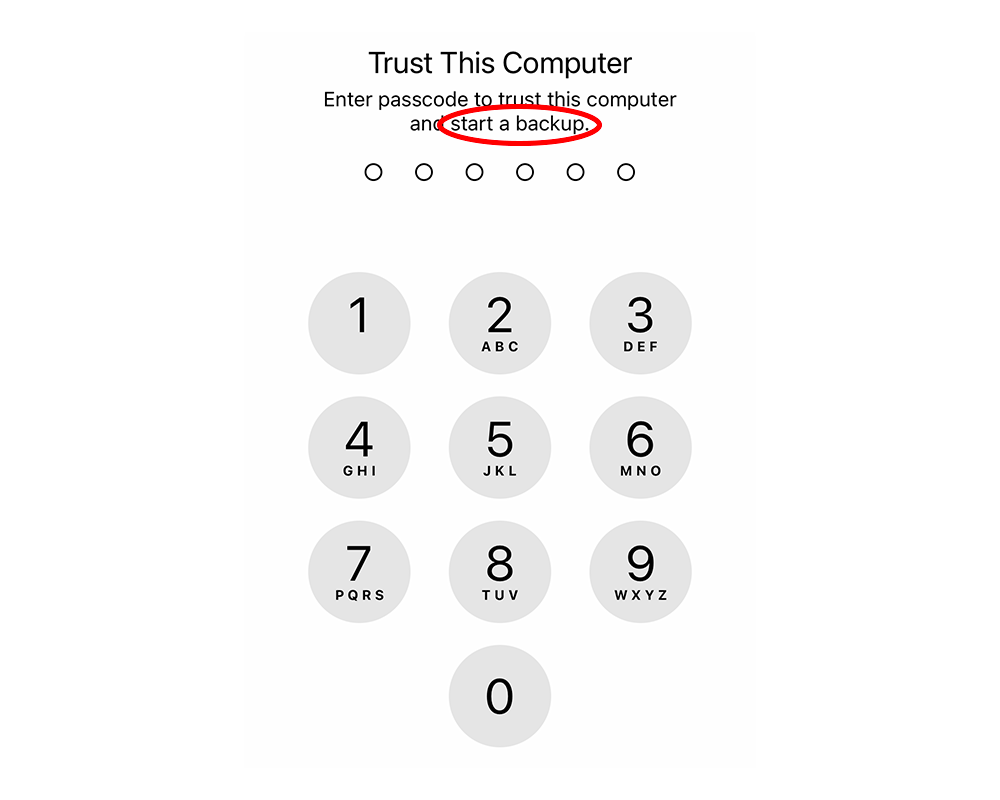 Communication between an iOS or iPadOS device and a computer running macOS or Windows requires the user to enter their device passcode to establish a pairing relationship between the device and computer. This pairing record is effectively certificate private/public keys that reside both on the device and the computer.

On the iOS or iPadOS device, the pairing records are stored in a secure location.

On recent macOS versions, the pairing records are also stored in a secure location /var/db/lockdown that is not accessible without disabling SIP, or System Integrity Protection.

On Windows, the pairing records are unfortunately not yet stored in a secure location C:\ProgramData\Apple\Lockdown, but that’s another story.

To pair a device and computer, users need to enter the device's passcode. Once pairing is established, any user or app on the machine can theoretically communicate with the iOS device and access various services running on this device.

By default, iOS backups are not encrypted. Users must enable backup encryption from Finder on macOS, iTunes on Windows, or third-party apps like iMazing. Enabling backup encryption requires the user to define an encryption password (set from the computer, but stored on the device), then BackupAgent displays a passcode prompt on the device to make sure the user truly has permission to enable encryption.

iMazing is capable of decrypting, browsing, and extracting data from iOS and iPadOS backups, so it is crucial to always enable backup encryption to ensure the data cannot be decrypted without the owner's consent.

The problem is two-fold:

Therefore, a user could theoretically pair their device with a computer, and another user or app on the machine could initiate a backup in an attempt to steal data if backup encryption is not enabled.

This is especially true since there are ways to store iOS backups outside of the macOS TCC protected location at ~/Library/Application Support/MobileSync/Backup. TCC is the Transparency, Consent, and Control system in macOS, an important security layer.

On Windows, the default backup location is not protected at all: C:\Users\<username>\AppData\Roaming\Apple Computer\MobileSync\Backup.

Since iOS and iPadOS versions 16.1 and 15.7.1, released 24 October 2022, Apple introduced a new security measure to mitigate the security issue raised by CVE-2022-32929, requiring users to enter their device passcode every time a local backup is about to start.

Many users prefer to locally back up their devices instead of using iCloud, the reasons for which are numerous and include, but are not limited to:

For many years, these users have been able to use apps like iMazing or the AppleMobileBackup CLI to automatically backup their devices over their local Wi-Fi network.

While the new security measure Apple introduced is intended to protect user data, it also makes automatic backups less seamless and more disruptive. These obstacles could lead to a reduction in backup frequency, which would actually put user data at risk.

Entering a device's passcode is impossible if the backup occurs overnight, or if devices are locked away charging (a common use case for schools or small businesses).

If you are interacting with the device when an automatic backup is attempted, your use of the device is completely interrupted by the passcode prompt, which can also be disruptive.

In any case, the more frequent your automatic backups, the more awkward backing up your device becomes with this new paradigm. Many iMazing users elect to back up their devices daily, and thus will be prompted 365 times per year for the passcode for each device of theirs that they wish to back up.

Here you go. You are probably right, it seems that this is how Apple fixed the issue at the end. 😳https://t.co/762nRZzo3s

We believe a better approach to this issue would be to prompt the user for a device passcode before every backup only if backup encryption is disabled, considering that:

Therefore, this is an effective way to protect user data while also encouraging users to enable backup encryption, which we at DigiDNA have always strongly recommended. iOS/iPadOS device backup encryption is extremely secure when the backup password is adequately strong.

It is our hope that Apple will be listening to the user community on this subject, as backing up iOS and iPadOS devices locally has become more difficult than it should be.